Kadcyla was formerly known to many in the cancer world as T-DM1 and has been a hot topic for some time now.  I was fortunate enough to attend a talk at Providence Hospital in Washington, D.C. this past October given by Dr. Sandra Swain, the current President Elect of the American Society of Clinical Oncology, where  she discussed some very exciting data surrounding T-DM1.  We all hoped with fingers crossed that approval would be soon.  Access to physicians like Dr. Swain is one of the great benefits of living in the nation’s capital and I try to take advantage of every opportunity I can to listen and learn from these great minds.

Why is Kadcyla so exciting?  I’ll tell you why.

The second reason I find the approval of Kadcyla so exciting is because of the hope it provides for a patient population that often feels ignored by the research community, pink ribbons and survivor celebrations.  Metastatic breast cancer patients will live with their disease for the remainder of their life.

Did you know that 30% of patients diagnosed with early stage disease will eventually develop metastatic disease?

Here’s a great infographic created by Genentech to help us understand a little more about Metastatic Breast Disease. 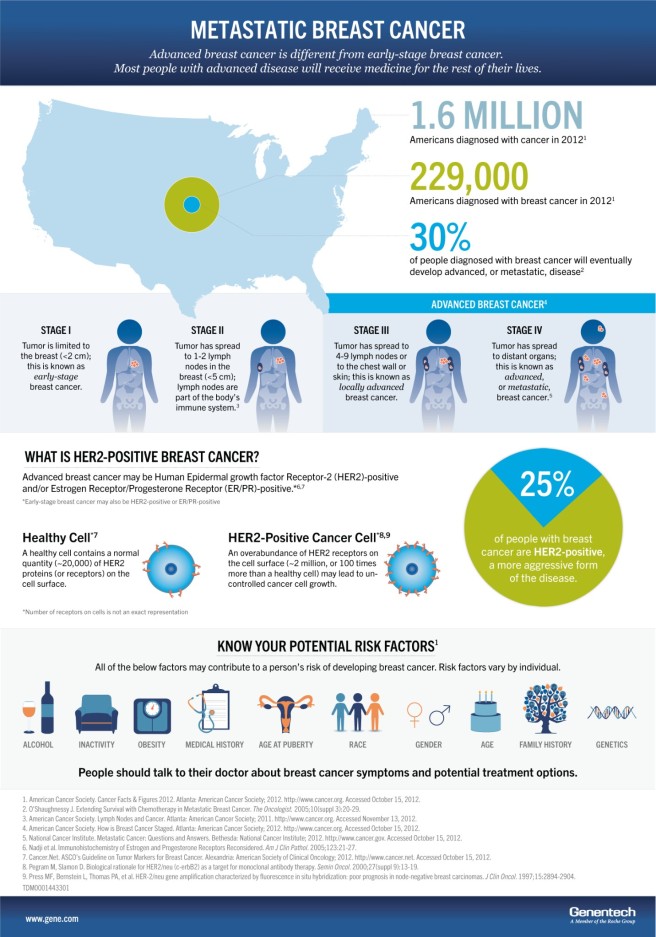 Hope.  It’s powerful.  Every day researchers, patients, physicians and family members are in search of a little slice, a glimmer of hope.  Maybe you need some hope in your own life totally unrelated to a physical illness- get out there and find it.  It’s out there.  I promise.

The information on this blog is for general purposes only and should not be considered or used as medical advice. Do not use the content available on PUGTATO as an alternative to medical advice from your doctor or professional healthcare provider.

The content on PUGTATO represents my views and opinions, only. Any comments made on this website by myself or by third parties do not necessarily reflect views or opinions of my employer.